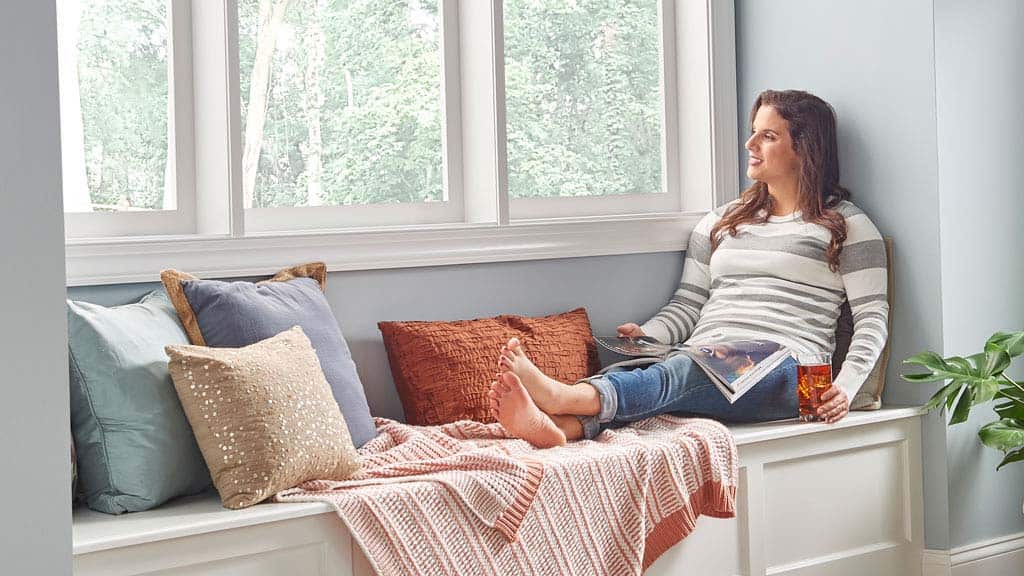 Control your comfort by improving the air you breathe.

Most people spend the vast majority of their day indoors. That means you want to maintain your indoor air quality (IAQ) through a combination of source control, improved ventilation, and air cleaners.

Our state, in particular, is susceptible to ash, dust, and soot from wildfire smoke from California and Oregon. Local experts expect the ozone pollution in Colorado to only worsen in the coming years. Let’s take steps to protect the air we breathe inside our homes and businesses.

Let Carrier Colorado match you with a Carrier dealer equipped with the knowledge and expertise you need for ideal comfort.

What Are the Most Common Indoor Air Pollutants?

Some common pollutants that are known for negatively impacting the indoor air quality of your home include:

No matter how clean you are, particles like dust, dirt, and dander are bound to appear. The Asthma and Allergy Foundation of America (AAFA) reports tree, grass, and weed pollen, mold spores, dust mites, cockroaches, rodents, and pet dander as some of the most common triggers. These allergens can easily form or make their way into your home, resulting in polluted air.

Pathogens like viruses, bacteria, and fungi may be present in the air you're breathing right now. Poor air circulation and inadequate humidity levels leave your home even more susceptible to spreading these contaminants. For ideal air quality, you’ll want a product that can destroy these pathogens and balance your indoor humidity.

Volatile organic compounds (VOCs) are dispersed into the air as gases. They stem from a variety of sources, some of which include paints, aerosol sprays, cleaning supplies, bug repellents, pesticides, building materials, and adhesives. The concentration of many VOCs is up to 10 times higher inside than outdoors. Many of these chemicals can cause short-term and long-term health consequences.

Greenhouse gases, like carbon dioxide, carbon monoxide, nitrous oxide, and water vapor, are created by many everyday gas-fired appliances. Exposure to these could be dangerous and negatively impact your health. Some home appliances that may be emitting these combustion pollutants into your home include your furnace, water heater, oven range, and dryer.

How to Improve Your Indoor Air Quality

Pollutants can easily infiltrate your home and cause poor indoor air quality. Consider taking these actions so you can start breathing cleaner air inside your home:

Other steps you can take include:

If you notice a problem with one of your indoor air quality systems, browse our Carrier Colorado Dealer Directory to find a Carrier dealer who can help. Our Carrier dealers can conduct an energy audit of your home and provide practical solutions. Whether there’s an issue with your humidifier, dehumidifier, air purifier, or UV lamp, Carrier Colorado can find the right team to get your system working correctly and even more efficiently.

Pollen enters through open doors and windows. Bacteria and viruses spread between family and friends. Fine dust particles get kicked up from floors and furniture. And, dander and hair fall from pets. These contaminants can make the air inside your home up to five times more polluted than outdoor air* and have the potential to spread disease and trigger allergic and asthmatic reactions.

Healthier Air for the Entire House
The air purifier is great for homeowners with allergy concerns, those susceptible to airborne germs, such as infants and the elderly, and those sensitive to the effects of pollen, pets and more.

How Does It Work?
These air purifiers use a unique three-step process:

The Air Purifier
These air purifier is our premier air cleaning and purification solution at MERV 15 and with patented Captures & Kills® technology. It provides a high tested germicidal effectiveness with a 99% inactivation rate against select viruses and bacteria. The replaceable filter cartridge can provide several months of filtration. 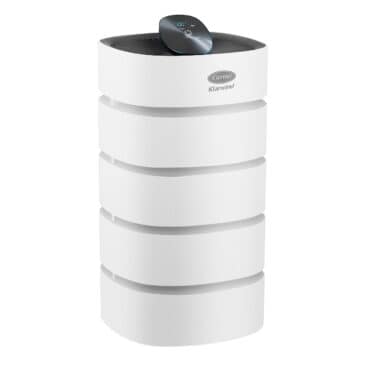 Our innovative room air purifier offers a simple, cost‐effective way to  improve the quality of your indoor air in almost any room. Its high performance fan and high‐efficiency filtration system extract airborne pollutants and deliver cleaner air in every direction, while easy‐to‐change filters make it a low‐ maintenance solution for busy households.

Ideal for classrooms, homes, medical offices, or any other part of your building needing cleaner air. The Room Air Purifier has been independently tested and certified by the Association of Home Appliance Manufactures (AHAM).Captures over 99% of airborne particles down to 0.3 microns for rooms up to 400 sq. ft.

The low maintenance, easy to change filter should be replaced every 6‐12 months based on usage. Simply replace the filter when the filter icon illuminates on the display. 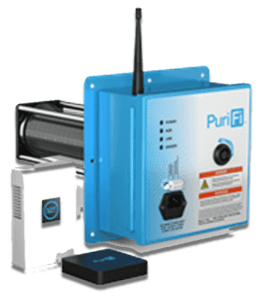 Monitor and control your indoor air quality with a whole home solution that proves its results!

GPS’ technology is the only indoor air quality solution that delivers clean indoor air that is safe and healthy without producing ozone or other harmful by-products. It is the safest option for your family, employees, and customers.

GPS uses Needlepoint Bipolar Ionization (NPBI) technology to safely clean the air inside commercial and residential buildings. This patented technology uses an electronic charge to create a plasma field filled with a high concentration of + and – ions. As these ions travel with the air stream they attach to particles, pathogens and gases. The ions help to agglomerate fine sub-micron particles, making them filterable. The ions kill pathogens by robbing them of life-sustaining hydrogen. The ions breakdown harmful VOCs into harmless compounds like Oxygen, Carbon Dioxide, Nitrogen, and Water. The ions produced travel within the air stream into the occupied spaces, cleaning the air everywhere the ions travel, even in spaces unseen.

This proven technology delivers clean indoor air that is safe and healthy – producing neither ozone nor other harmful by-products. All our NPBI products are UL and CE approved. Through NPBI, our products purify the air by eliminating airborne particulates, odors and pathogens. The combined effect is a lowered carbon footprint for your facility and up to 30% energy savings through a reduced (up to 75%) outdoor air intake.

PremierOne whole house air purifiers don’t mask odors, they oxidize them with a controlled amount of activated oxygen. Enjoy the fresh smell of clean air after the odors of tobacco smoke, mold, mildew, paint, garbage, litter box, cooking and bathroom odors (plus hundreds more) are eliminated. Some of the most dangerous gases, which may be odor free, including toxins, are also oxidized. The system produces a safe level of activated oxygen similar to the air you breathe outdoors in nature.

iWave is an air purifying device that installs in any duct air conditioning system. When air passes over the iWave, ions produced by the device reduce pathogens, allergens, particles, smoke and odors in the air, creating a healthy environment without producing any harmful byproducts.

iWave uses patented technology, called needle-point bi-polar ionization, to create equal amounts of positive and negative ions. When these ions are injected into the air stream, they break down passing pollutants and gases into harmless compounds like oxygen, carbon dioxide, nitrogen and water vapor.

When the ions come in contact with viruses, bacteria or mold, they remove the hydrogen molecules – without them, the pathogens have no source of energy and will die. The ions also attach to allergens like pollen and other particles, causing them to band together until they are large enough to be caught by your ventilation system’s air filter.

iWave’s technology generates the same ions that nature creates with lightening, waterfalls, ocean waves, etc. Nature uses energy and shear to break apart molecules, naturally cleaning the air and producing a healthy environment. The only difference between the iWave’s technology and nature is that the iWave does it without developing harmful ozone.

iWave air purifiers have no harmful byproducts, and most models require no ongoing maintenance and have no replacement parts. In fact, with the iWave-R’s patent-pending self-cleaning design, you can enjoy years of maintenance-free performance.

Nu-Calgon offers a three-year limited warranty on iWave products. For a valid warranty claim within three years, proof of purchase and proof of installation by a licensed HVAC or electrical contractor must be provided. See full warranty for complete details.

Invented to recreate nature’s process of purifying the air, it’s like bringing fresh outdoor air inside without ever having to open your windows. And it’s effective against all three categories of indoor air pollutants: Particulates, Microbial and Gases.

You can now reduce common allergy triggers from particulates such as pollen, mold spores, dander and dust. Thoroughly tested on airborne and surface bacteria & viruses, such as MRSA, e-coli, and Norwalk, to name a few. Say goodbye to odors from cooking, pets, dirty socks, diaper pails, and musty rooms.

The REME HALO® in-duct air purifier utilizes RGF’s proprietary Reflective Electro Magnetic Energy technology. Installed into the supply plenum of your existing air conditioning or heating system air ducts, the REME HALO® in-duct air purifier produces Hydro-Peroxide plasma that is distributed through the air handler, through the duct system and into the conditioned living space. Unlike passive air technologies, which need pollutants to pass through the unit for purification or filtration, the REME HALO® in-duct air purifier sweeps through your home actively purifying pollutants at the source. In addition, the charged plasma induces particles to coagulate or stick together making them bigger and easier for your filter to catch. Hydroperoxides occur naturally in the earth’s atmosphere and are part of nature’s process of cleaning the air.

The redesigned and improved REME HALO® whole home in-duct HVAC unit features higher ionized hydroperoxide output, which gives faster kill rates for microbial contaminants in the air as well as on surfaces. This higher output also drops more particulates from the air, bringing relief to those who suffer from allergies and other respiratory issues. Now with quick release features for the cell and housing for faster cell replacement and an adjustable shroud for customization of the advanced oxidation plasma output.

The CinQuartz® True HEPA Air Cleaner on wheels has been designed to remove 99.97% of atmospheric and household dust, coal dust, insecticide dust, mites, pollen, mold spores, fungi, bacteria, viruses, pet dander, cooking smoke and grease, tobacco & cannabis smoke particles, and more down to 0.3 micron (1/84,000 of an inch) on the first pass of air. As the HEPA filter becomes
dirtier with time, it becomes more efficient and can capture particles as small as 0.001 micron.

The air passes through a pleated Carbon Prefilter which removes lint and large particles to extend the life of the HEPA filter.

Smaller particles then pass through a long-life, 99.97% HEPA (High Efficiency Particulate Air) Media Filter which captures particles 0.3 micron (1/84,000 of an inch) and larger.

The clean air passes through a reflection chamber where two Ultraviolet Germicidal Lamps emit powerful UVC light rays which are designed to kill or inhibit bacteria, viruses, mold, fungus and microbial growth. These are non-ozone producing lamps. The Ultraviolet Lights are also used to activate the unique CinQuartz Media located below the UVC lamps.

The Photo Catalytic Oxidation (PCO) Filter is a Quartz media coated with nanoparticles of Titanium Dioxide (TiO2). The combined action of the UVC light and the TiO2 decomposes organic materials into basic molecules such as H2O and CO2 and reduces odors and VOC’s as a result.

Find awesome listings near you!